The following text and images are taken from 'Notes on Turton Tower' by Sir Lees Knowles, published in 1906.

MANY of us remember the late Mr. James C. Scholes, of Bolton, and we have read with pleasure his interesting and valuable works, such as “Documentary Notes Relating to the District of Turton” and “Notes on Turton Tower and its Successive Owners.” I am not, however, proposing to tread in the steps of our local antiquary, but merely to put together a few observations upon the architecture and condition of Turton Tower, which may perchance be of interest at the present time. Perhaps later, with the assistance of friends and neighbours, I may be able to give a fuller and more complete account, and to enthuse a still greater respect for the many ancient and valuable objects of interest in the neighbourhood, with the view to increasing our respect for them and to induce their repair, or their preservation and maintenance. 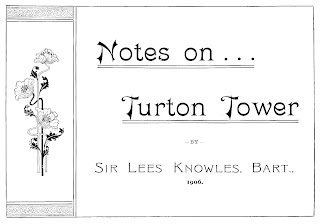 “Turton” is a contraction of “Tower-town," and Turton Tower, whence the name is derived, is an interesting and valuable memorial of the past.

No doubt, originally there was merely a single tower, of the kind known as Peel Towers, so common in ancient times on the borders. These towers appear to have been constructed of earth and timber, strengthened by palisades; but latterly, a “Peel” was a small square tower with turrets at the angles, and with a door considerably raised above the ground. The lower part, where the cattle were kept, was generally vaulted. The word “peel” appears to be derived from the Latin word pila, meaning a pillar or a pier, and also a mole or mass of stone, from which, no doubt, we have the English word "pile,” meaning a tower or castle, and the expression, "a pile of buildings."

The Tower, a single rectangle of stone, probably about three storeys in height, with walls about four feet in thickness, was placed close to the banks of a stream. There is no architectural feature remaining to determine the precise date of the original walls, which are of a somewhat rough order, with large quoin or corner stones. The ashlaring, or facing used to cover walls of rubble, is very irregular, large stones being packed with small ones. The masonry, however, is in a singularly perfect state of preservation.

At the north-west corner of this rectangle are the remains, perfect still at the top, of a “vice.” A “ vice," or a “vise," as it is sometimes spelt, is the newel, or central shaft, of a winding staircase. The word is derived from the Latin vitis, “a vine,” and allied to the French vis, “a screw.” It is not quite apparent whether this is a part of the original structure, or whether it was added when, towards the close of the Feudal period, the Tower may have been converted into a more comfortable residence by the introduction of mullioned windows, which probably were substituted for the previous loops and arrow-slits. At the northeast corner of the battlements, in the earliest part of the building, may still be seen the shaft of the garderobe for the soldiers. This is perfect, but its outlet at the base is now concealed. The garderobes in the walls were cut probably at a later date.

In the opinion of my college friend, Mr. W. D. Caröe, a Lancashire man and a distinguished architect, the first change, if the walling is of earlier date, took place in the fifteenth century, when windows, apparently of two lights on the two lower storeys and one light above, iron-barred and shuttered, but without glass, were introduced, and when, according to clear evidence, there were three low storeys in the building. At this time, the extent of the Tower was still only a rectangle. This is clearly shown by the remains near the pantry-door of a window almost entirely destroyed, and by the further remains of a window-now internal-above it. Both these were on the original north face of the Tower. Two of the windows of this date on the ground floor, one on the upper floor, and five on the original top floor still remain blocked up, but all of these last are not easily visible. At the same time, the lower portion of the present kitchen wing was added, and most probably the garderobes cut in the thickness of the original walls. This kitchen wing consisted of a two-storeyed building, with a heavily-timbered, pitched roof. It had three detached and large chimneys in the centre, and two corbelled from the west wall. The grotesque label-terminations, or projecting mouldings, now existing on most of the windows of this wing are modern, and probably belong to the restoration of 1831-44.

With regard to the erection of the circular staircase, the evidences at present obvious are conflicting, and a removal of the plaster would alone enable a judgment to be formed. If it is original, it seems strange that the staircase walls should not be thicker, or that the staircase itself should be so large. On the other hand, some approach to the battlements, or to the upper storeys of the original tower, must have existed, and there would be none more likely than a “vice.” 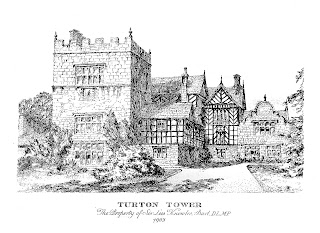 The Tower did not long continue in the condition so far indicated. In the reign of Queen Elizabeth, and probably towards the close of it, vast changes were made, with a view of bringing up its comfort to the more luxurious standard of those times. The old floors were taken out, and the storeys raised, so that two occupied nearly the whole space of the former three, and a new storey was added. Large three, four, and five-light transomed windows, heavily mullioned, were substituted for many of the previous ones, and a new entrance and entrance-hall was erected on the north side of the Tower, with a half-timbered storey of two gables over it. It is not quite clear whether the present oak staircase was erected at this period or not, in any case, it has been subsequently considerably tampered with. One would be disposed, on the face of it, to think its erection likely at a time when so many changes were in hand, and when imposing staircases were so much in vogue; but it intrinsically bears evidence of work of a date some twenty or thirty years later. One can only suppose that the former winding stone staircase, or vice, had become dilapidated, for rooms of no importance were secured by its destruction through the two lower Alights, and that the oak staircase was substituted for it.

It remains to be proved whether the side walls of the existing entrance-hall are ancient or not. Mr. Caröe is at present disposed to think that they are not ancient. It appears that in 1831 there was a halftimbered structure of three storeys, containing the oak staircase, but there is no evidence to show whether it was a recent erection or not. The entrance-hall acquired its present form between 1835 and 1844, when it was re-cased in deal, with elaborate carvings in the barge-boards, which project from the gables, hiding the horizontal timbers of the roof, and are quite foreign to the original more solid and monumental work. Between 1835 and 1844, changes also took place in the kitchen wing, and the curved Jacobean gable was then first introduced. Subsequently to 1844, the third storey was raised over the kitchen wing, and the halftimbered gable in deal, which is at right angles to the entrance, and for which there was no authority, was  built. In this, the details of the 1835-44 work were studiously copied. At the same time, the original kitchen chimneys, which consisted of three large detached shafts rising out of the roof, were entirely lost. In this restoration, also, the sills of the windows of the drawing and dining-rooms were lowered, and their ancient proportions were destroyed. There is no clear evidence to show whether in 1835-44, or during the later so-called restoration, the existing window was introduced in the morning-room, and the curious chimney, of a factory type, raised. It is quite clear, however, that considerable changes have taken place in the north wall of this room. The present wall does not occupy the ancient position, but it cannot be surmised what the existing arrangement replaced unless excavations for foundations are made.

Referring more particularly to details, especially of the interior, it is generally to be noted that the eighteenth century restorations have largely interfered with the antique interest of the building, so far as the outward observance is concerned. In the morning-room the panelling, although it is for the most part old, has been adapted to the room. The panelling in the dining-room was introduced from Middleton Hall, Middleton, near Manchester. It is fine work of its kind. The mantelpiece and ceiling are modern. No doubt, the ancient windows in the east and west of the dining-room were blocked up when the panelling was introduced. In the drawing-room, respect has been had for the old fifteenth century window on the east side, which, with its ancient shutters, can now be examined by withdrawing one of the panels. The vestibule entrance to the drawing-room is modern. On the second floor of this wing, great changes of plan have been introduced. There were originally no passages, as the recent discovery of a perfect ancient fireplace in the existing passage proves. The whole wing appears to have been re-roofed, the ancient corbels which carried the beams being now, in most instances, unoccupied.

The second storey of the kitchen wing needs no comment. On the first floor of this wing great changes have taken place. The relative level of the rooms and passages has been falsified, and the windows introduced, which, although glazed outside, have no existence within. In one of the eastern rooms, a carved purlin of interesting character exists. In architecture, it is a piece of timber extending from end to end of a building or roof, across and under the rafters, to support them in the middle. This purlin has its counterpart in an adjoining copy, but whether this is an original feature cannot be ascertained until closer examination can take place.

The following is a brief record of the family ownerships of the Tower and Manor, as disclosed by documentary evidence:

It thus appears that the Orrell family were responsible for the earlier extant architectural features of the Tower, and also for the transformation of Queen Elizabeth's reign, and that the Kay family were mainly the instigators of the nineteenth century restorations, although some changes are said to have been introduced during the ownership of Miss Appleton.

In further connection with these restorations, it may be observed that an Elizabethan mantel-head has been used as a door-head of the lodge. This is a counterpart of the one recently found over the ancient fireplace in the second floor passage, and also of that existing in the billiard-room.

In connection with the Tower, the barn at the farm should be noted. This is an excellent example, especially in its gable, of characteristic Lancashire seventeenth century building.