The Three Jolly Crofters and the Scowcrofts

A deed of 22nd December 1802 details the lease of one acre (being a Cheshire acre this would be equivalent to 2¼ statute acres) of land called Blunder Hillock by John Isherwood of Marple Esq (the Lord of the Manor) to John Scowcroft of Bradshaw, cotton spinner, at the yearly rent of £9-9s-0d on the lives of John Hamer (age 15) Robert Hamer (age 12) and Andrew Hamer (age 7) sons of Mary Hamer, widow of James Hamer of Bradshaw. 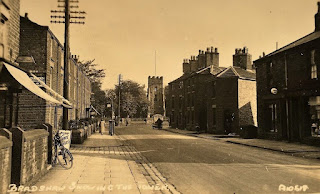 This piece of land was immediately behind the Ramsden’s building on the corner of Lee Gate and was part of the larger Morts Hill area. Unfortunately, there is no plan with the deed, but it encompasses the area on which a cottage was subsequently built between the old Lee Gate Bleach Works and the Lee Gate farm/cottages, as well as the land on which the three storey works/farm building was eventually erected at Back Bradshaw Chapel - probably for John Scowcroft’s spinning business. Both these buildings enjoyed a common access from Bradshaw Road.

Th’owd Landlord, William Scowcroft (1750-1808), had made his mark in the area and left his sons in a good way. Son John, we have already mentioned as being a spinner having a lease on part of Blunder Hillock. Son Samuel was farming at Meadow Barn, his land coming down to the Bradshaw Chapel corner including Morts Hill and part of Blunder Hillock. He also in 1831 held the lease on the 'old factory' (the old Lee Gate Bleach Works) and its reservoir, also the Lee Gate cottages onto which he had built a new barn, part of which became the Smithy run by Lawrence Horrocks. Nathan Ramsden was still living in one of the cottages, the others occupied by James Chadwick, and Thomas Haworth with Lawrence Horrocks occupying the end cottage next to his smithy.

Another son of th’owd Landlord, Thomas Scowcroft (1782-1855) was noted in the 1820 Directory as a grocer as well as a coal merchant under Thomas Scowcroft & Bros. The corner property opposite the Jolly Crofters built by Nathen Ramsden was enlarged into a shop with its front on Bradshaw Road, having been originally set back with outside steps up to the first floor. The entry round the corner opposite the school was left open as access to the rear of the cottages as well as access for supplies to the rear of the shop.

An estate map and schedule were drawn up in 1831 by Thomas Bird on behalf of John Isherwood, Lord of the Manor of Bradshaw, the map showing the Chapel Area as it had been for the previous 30 to 50 years and prior to the development in evidence today.

The lease on Blunder Hillock and the cottages on the corner of Lee Gate was later granted to Thomas Scowcroft of Bradshaw, coal owner in 1854 for 999 years retrospectively from 1834. This time loss was due to the then Lord of the Manor, Thomas Bradshaw Isherwood, being registered as a lunatic and whose affairs had to be confirmed by Trustees of the Estate, his wife Ellen being one of the Trustees. It was during the early years of this long lease to Thomas Scowcroft that the old cottages and barn property along Lee Gate were modified to match up with a new shop front on the corner and further cottages progressively built-on along the bottom of Bradshaw Road.

This development of the corner opposite the Jolly Crofters was completed in 1838, the date on the corner shop, the front of which seems to have been rebuilt to line up with the newly built frontage of the Lee Gate cottages and the line of the seven additional cottages along the bottom of Bradshaw Road.

This 1834 lease to Thomas Scowcroft also included the strip of land on which the second row of cottages along Bradshaw Road were to be built as well as the land to allow a nine yards wide street between the two rows of cottages leading to Back Bradshaw Road. The corner shop and its two neighbours had extensive interconnecting cellars, suggesting that these two properties were built together with the shop unit. The corner shop and the next two properties were built as through cottages while the next five, later to be numbered 80, 82, 84, 86 and 88 on Bradshaw Road, were built as back-to-back cottages, hence the need for the access street. Of the second row, the first house was through with the remaining five being back-to-back.

It is interesting to note that in the 1834 (1854) lease Thomas Scowcroft also secured water supply rights for these corner properties on Lee Gate and Bradshaw Road from the old Lee Gate Bleachworks reservoir, as did the Scowcroft brothers for use at the Jolly Crofters. Thomas Hardcastle also secured a supply for Bradshaw Hall Works by running an underground pipe from Lee Gate Reservoir back to the yard reservoir.

On the opposite corner where William Scowcroft had built his house ‘The Three Jolly Crofters’, further land leases were agreed by the Bradshaw Estate. In 1834 the land immediately behind the Crofters where Scowcroft Court was to be built, a 53-yard strip of land 15 yards wide stretching from the Crofters along Bolton Road and a 50 feet wide strip of land between the Crofters and Rigby Lane were leased for 999 years.