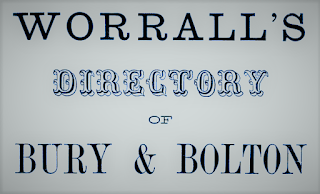 TURTON is a township in the parish and Union of Bolton, four miles north, situated on the Blackburn line of railway, the Bolton turnpike road, and a small rivulet called Bradshaw brook. The Church, dedicated to St. Ann is situated at Chapeltown ; it is a neat stone building, and has nave, aisles, chancel, porch, and tower containing one bell, east window of richly-stained glass, a spire and pinnacles, an organ, and part of a library, left by Humphrey Chetham, Esq., in 1654. The register dates from 1813. The living is of the annual value of £150 ; the Rev. James Ogden King Spencer is the present vicar. There are Chapels for Independents, Presbyterians, and Unitarians, and several Day and Sunday Schools in the township. A fair is held at Chapeltown on the 4th and 5th of September yearly, for horses, cattle, etc. The township is partly in Christchurch and St. Ann's districts. There are cotton mills, paper, print, bleach works, and several quarries in the township. There are charities of upwards of £30 yearly value. Turton tower an old stone building, having two gables of wood and plaster in front, is the residence of James Kay, Esq.; in Camden's time it was the residence of the illustrious family of Orrell. The population of the whole townhip in 1861 was 4,513; the acreage is 4110; the rateable value was in March, 1866, £15,370; March, 1868, £15,339 ; and in March, 1870, £16,946.

EGERTON is a well-built, neat village of stone, pleasantly situated on the Bolton and Blackburn turnpike road, three miles north from Bolton, and about a mile and a half north-west from Bromley Cross railway station. The Established Church, called Christ Church, situated at Walmsley, is a stone building in the early English style of architecture, was erected in 1839, and was partly rebuilt and enlarged in 1868. It has nave, aisles, chancel, and tower containing one bell, and surmounted with pinnacles ; the interior contains an organ and three stained glass windows. The living is of the annual value £150, with residence, in the gift of the vicar of Bolton, and held by the Rev. Ralph Culvert Williams Croft, B.A., of Trinity College, Dublin. The Ecclesiastical district embraces Birtenshaw, Dimple, Dunscar, Eagley bridge, Egerton, Hardmans, Stanrose, Stones, Toppings and Walmsley. There are chapels for Independents, Wesleyans, and Unitarians, National and British schools. Here are extensive cotton, bleaching, and dyeworks. The
land is chiefly pasture.

EAGLEY BRIDGE is a neat hamlet, 2 1/2 miles south-west from Chapeltown railway station and is separated from Eagley bank by a small rivulet on the bank of which there is a paper manufactory and ironfoundry. There is a well-built School at Eagley bridge, which is licensed for divine service; it was erected by Messrs. Chadwick and Brothers.

Conveyance—Messrs. Greenwood & Holden's omnibus runs between Egerton and Bolton on Mondays and Saturdays
Carriers pass between Bolton and Blackburn