A Very Improper Book to Read

Turton Fair, and Its Pernicious Consequences

This book is about a poem by William Sheldrake on the subject of the well known local event ‘Turton Fair’. William Sheldrake was probably an excise officer living in Chapeltown, in the 1780s. One Turton Fair, he received a life-threatening beating, which left him with six broken ribs and sufficient rage and ill-feeling to write and publish a 650-line poem, denouncing the village, its inhabitants and above all, its Fair. Sheldrake’s poem, entitled ‘A Picturesque Description of Turton Fair, and Its Pernicious Consequences’, is the earliest known reference to an event which, for the next 147 years, was to be an occasion of great pleasure to many and of great outrage to others. The story of those 147 years is largely contained in newspaper reports, which became more frequent and more detailed as the Fair grew in size, especially after Chapeltown railway station opened in 1848. They show the growth of the Fair from the localised event described by Sheldrake to ‘one of the most important held in Lancashire’, as it was described in 1851, to its rapid decline in the early twentieth century.


‘Who that lives for miles round Bolton has failed to hear about Turton Fair? Its fame has extended far and wide in Lancashire and is known by reputation to hundreds in all parts of the country.’------- Bolton Chronicle, 8 September 1877.

All we know of William Sheldrake is derived from what we can infer from his poem and the dedication which prefaces it. So far, no references to him have been found in any other contemporary document. In the dedication he refers to Turton as ‘the place of my residence’ and in the poem refers to ‘TURTON alias CHAPEL-TOWN’ which suggests that he lived in the village, and not elsewhere in the township. These statements probably led an early twentieth century journalist to describe him as ‘a local man’, but this he almost certainly was not. In the first place, the surname Sheldrake is rare to non-existent in Lancashire, and one would expect a local man to have some family of the same name living in the district. But we know of no Sheldrakes buried locally, there were none in the locality in the national censuses which began in 1841, and only two in the whole of Lancashire (in Liverpool) in the 1901 census. That same census shows that Sheldrake was a fairly common name in East Anglia, and also occurred in the London area, and it seems reasonable to suppose that his family origins were somewhere in those regions. So what was Sheldrake doing in Chapeltown?

The writer of the poem was clearly a well-educated man. Chapeltown in those days offered few posts suitable for men of education, and those that it did, the parson and the schoolmaster, were both occupied. We know the parson sometimes had a curate, but in spite of Sheldrake’s strong religious views, it is unlikely that a curate would pen a long passage in a poem denouncing his immediate superior. In later years the schoolmaster too was to have assistant teachers, but neither school numbers nor the school budget justified such a post in the 1780s. First-generation businessmen were beginning to live in the area, but they tended to be self-made men, with limited conventional education and few literary pretensions. He could, however, have been a doctor, and some support for this view comes in the poem when he tells us that the fight he got into was promoted by a doctor and hints that his opponent was a doctor too.

However, we think Sheldrake was an excise man. The main evidence for this is his dedication of the poem to ‘William Cross, Collector of Excise, Manchester’. It seems odd to look for a patron in a Collector of Excise, unless that individual could do something for you, like influencing your promotion or just finding you a job elsewhere. It seems unlikely that after his experience and the publication of his poem Sheldrake would want to continue living in Turton, and Cross may have been the man to deliver him from ‘this curst abode’. There is evidence that an excise man lived in Chapeltown at a slightly later date, and he could have been a successor to Sheldrake. Being an Officer of the Excise may also help explain why he was not a local man. Fifty years after Sheldrake, the Lancashire Constabulary had a policy of appointing village policemen who had no local connection to increase the chances of them carrying out their duties in an impartial way. It is likely that the Board of Excise had the same policy, sending their officers to different postings for a limited number of years. No exciseman would be welcomed in an area like Turton where illegal distilling was common, so it would be an unusual local man who would relish the post, while a stranger to the area might find the job more palatable, knowing that he would eventually be moved elsewhere. 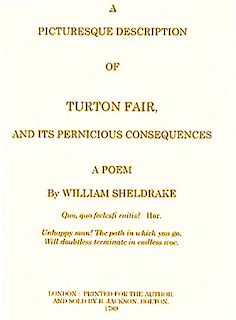 That the job of exciseman was universally unpopular at the time might help explain Sheldrake’s sour view of the village and its fair. A few years before Sheldrake came to Turton, Dr Johnson had, near-libellously, defined excise as ‘a hateful tax levied upon commodities, and adjudged not by the common judges of property, but wretches hired by those to whom excise is paid’. If Sheldrake was one of Dr Johnson’s ‘hired wretches’, a posting near the new cotton mills in the area to collect tax on their products was a strong possibility. However, an excise man was also responsible for issuing excise licences to small businessmen. He could fine them for breaches of their licence and prosecute them for trading without a licence. That licences were required for pedlars, sweet sellers, auctioneers and brewers would mean that there would be little love lost between an exciseman and the fairground traders Sheldrake holds in such contempt. His pursuit of illegal stills, usually located in farm buildings, would not endear an exciseman to local farmers, who also get a bad press in the poem, and a responsibility for collecting window tax might have coloured his view of Harvey the glazier and his dubious pies. Sheldrake’s fight with ‘Galen’ (a pseudonym for a doctor) may have its origin in a licence,or the lack of it, to sell patent medicines, an important source of income for doctors at the time.

One thing that can be said for sure about Sheldrake is that he was under the influence of the Evangelical Revival inspired by John Wesley. His confession that he is a recent convert to these views –‘born again’ in modern evangelism – suggests that his encounter with ‘Galen’ and its near-fatal consequence provoked a radical reassessment of his way of life which was the inspiration for his verse. His commitment to Christian action against behaviour contrary to Christian principles is a theme with which he begins and ends his poem, and which is the nub of his disapproval of the parson’s sermon. His views on drinking, sex, fighting, gambling, keeping the Sabbath, parenting and his general concern for children and adolescents could all be heard from Methodist preachers of the day, but only gradually became standard in Anglican pulpits during the course of the following century. His horror at the treatment of horses was ahead of its time, foreshadowing by a generation or more a series of campaigns against cruelty to animals which culminated in the protection animals receive from the law today.
Posted by Turton Local History Society at 16:44