The following article was written about forty years ago by Mr H Peters of the Darwen Centenary Society, reproduced in Turton Local History Society Newsletter No. 94 (April 2017):-

Just about the time of the incorporation of the new Borough of Darwen there was fought out a great 'derby' match between Darwen and Turton football clubs, on the latter's ground. Over 1000 people travelled from Darwen to the game, and, according to the Darwen News account, the railway staff were quite unable to cope with the unexpected rush. 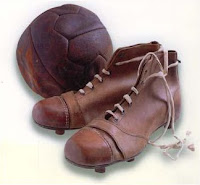 From the account of the game itself it is possible to glean some idea about the style of play almost 140 years ago. For example, we are told that the Darwen players Knowles, Lewis and Marshall 'bandied the ball about among six or seven of the home team, within ten yards of the goal. Then Bury charged the goalkeeper splendidly, and made that officer smell Mother Earth forcibly'. Later in the match 'Knowles, Bury, Lewis and Kirkham each successfully checkmated a man in a scrimmage. Marshall stormed the castle by kicking a much coveted goal. The ringing cheer could have been heard in Darwen'.

Needless to say referees were no more popular then than they are today. On this occasion indeed there were three of them making a triple target for the crowd's abuse and the reporter's criticism. 'Had the umpires been nearer', he says, 'they would have given Darwen another goal'. Incidentally, these three unfortunates who could not keep abreast of the play were the captain of Bolton Wanderers, and the captain and vice-captain of the Eagley club. They appear to have preferred to remain anonymous, or perhaps the reporter intentionally consigned them to oblivion.

Darwen led by that one goal at half-time. In the second half the home team clearly improved, but although they attacked far more, and on one occasion 'shot inches over the tape', they did not manage to equalise. This remark is interesting, because the crossbar had in fact been introduced in 1875, and a photograph taken five years later appears to show one in use at Barley Bank. Perhaps Turton were slow to adopt the new idea, or perhaps, and this seems more probable, the reporter was simply using an old phrase familiar to his readers.

The summing up of the same makes an interesting study. Of James Knowles, a Darwen star, we are told that he was hot-headed, ready to dash at it, 'a neck or nowt go-ahead player', not to be set on. Kirkham, on the other hand, was the 'dancing master' whose opponents were in constant fear of being 'plucked' - presumably beaten by his footwork. Bury 'would as soon play with his head as his feet', clearly an unusual attribute in those days.

Even in 1878 however money was beginning to talk in football. Only a few weeks earlier the great Fergie Suter had played in Darwen with a side from his native Scotland, and he was soon to come to settle in the town and to become probably the first professional player in the history of the game. By 1883 he was a Blackburn Rovers stalwart, and appeared in all three of their FA Cup winning teams of that time. Obviously the legalisation of professionalism in 1885 was merely an acceptance by the FA of the status quo. Clearly with multi-million pound transfers now commonplace in this country Darwen has much to answer for. So for that matter has Turton it would seem, for the Darwen News report makes a special point of saying that players in such matches should not be permitted to bet on the result. It does not name the men concerned, but claims that they will be well enough known in Turton. So perhaps there were planted the seeds of the great financial empire of the pools.


Certainly Turton can be said to have been the scene of some of the earliest crowd trouble in the game, at any rate locally. The 1878 game revived memories of a match played in 1830, almost 50 years before, and a correspondent recalled the annual games that took place at one time between Darwen and Tottington at Round Barn every Collop Monday - that is the day before Shrove Tuesday. In 1830 it seems Darwen had a good team, made up of hand- loom weavers, who we are told, were skilled at the game because they played two or three days a week. Incidentally, this suggestion that the weavers had more leisure than tradition usually implies, is one that the writer has come across elsewhere.

There were twenty players a side in 1830, five 'back players', two 'side players' and thirteen 'in- players'. At each end of the pitch a line was marked fifteen yards from the boundary fence,  and the area thus defined was known as the 'ass-hoile'. A goal was scored by kicking the ball over the fence, although could only be done from inside the 'ass-hoile'. The game was started by the thirteen 'in-players' lining up opposite each other in the centre of the field, somewhat like modern American footballers one assumes. Then the ball was 'trundled' in between the two ranks and the fun began.

Players could kick, throw or run with the ball in their hands, but oddly enough could not kick it from their hands goalkeeper fashion. There was, we are told much 'fighting, hurling, kicking and swearing'. To excel a man had to be a 'good kicker, a swift runner, and a desperate fighter'. That the Darwen team of 1830 were all of these things is clear from some extracts from the story. 'Jem Hargreaves' we read 'carried the ball, and floored two opponents with his fist and one with his foot'. He passed to Taylor who 'upped it', that is scored a goal, whilst the redoubtable Hargreaves knocked down another opponent.

At one point the cry went out 'piece up hands'. This meant that all players had to acknowledge which side they were on, so that numbers could be checked. Perhaps it was just as well as the home team was found to have twenty five!

Which team actually won the encounter is uncertain, but it seems probable that it was Darwen, for at the end of the match 'pigeons were thrown', presumably to carry the glad tidings back to the town. In addition the local crowd attacked the Darwen team with 'stones, sticks, staves, hammers and cleavers'. It was 'as bad as the battle of Waterloo', and the team were chased as far as Teapot Brow. Furthermore Darwen men living in the Turton area had their windows broken that night.

The shadow of things to come!